The 8 Best Doughnut Shops in Tennessee! 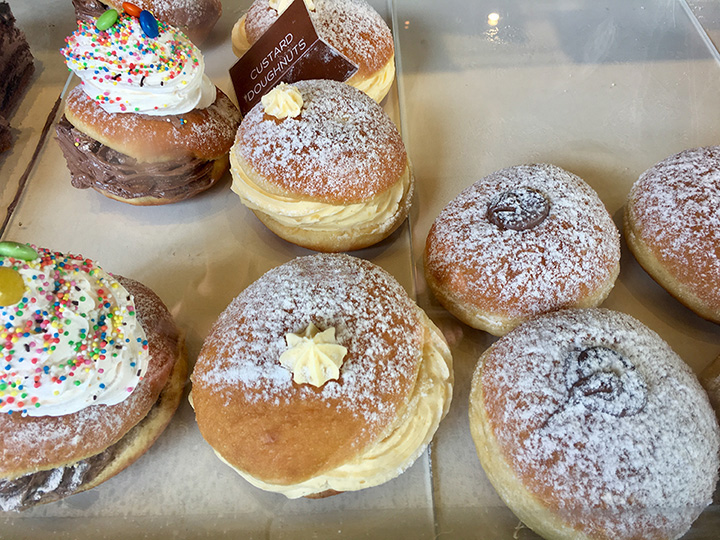 Nothing quite beats a freshly-baked doughnut. Whether you prefer the traditional glazed, like to customize your own, or want to try a totally unique take, Tennessee’s many bakeries rise to the occasion. Take a sweet sojourn through the Volunteer State and check out the following 8 doughnut shops, stat.

Donut Country in Murfreesboro, Tennessee, serves breakfast, lunch, and dinner under the maxim that “Not All Donuts Are Created Equal.” Donut Country has been locally owned and operated for over 20 years, and have built up a loyal customer base as a result. The range of doughnuts and flavors is staggering and the pictures alone will get your mouth watering. The buttermilk cinnamon doughnut, in particular, is worth the trip alone!

Five Daughters Bakery is named after the owners’ five young daughters and has locations throughout Tennessee. You can find five Five Daughters locations in Nashville and one in Franklin. The doughnut offerings change month to month based on available ingredients, and the easiest way to see what they have in stock is to visit their website’s “Donut Cam,” which is a live feed showing their inventory moment-to-moment. Staple flavors include maple glaze, vanilla cream, chocolate sea salt, King Kong, and vanilla sugar, with weekend flavors like peaches and cream.

Master Donuts and Coffee opened just three years ago, but has already expanded to three locations, one in Lenoir City, one in Rocky Top, and one in Clinton. Their doughnuts are made fresh daily and include cake or glazed, old fashioned, jelly, apple fritter, cinnamon roll, bear claw, and chocolate chip. In addition, Master sells muffins, croissants, biscuits, bagels, beverages, and pig in blankets. The menu is straightforward, but the quality is world-class.

Tasty Donuts was awarded the Best of the Best award by the Chattanooga Times Free Press in 2012, 2013, and 2014. They boast the largest selection of doughnuts in the area with at least 50 unique flavors offered every day. The menu includes cake doughnuts, raised doughnuts, fancies, fillings, and customizable doughnuts. Custom toppings include a wide variety of icings with everything from strawberry to cotton candy. Make sure to check their website for an updated list of offerings and daily specials.

Gibson’s Donuts is not only a Memphis staple, but it’s an American institution. Since 1967, Gibson’s has consistently baked up some of the most amazing sweet treats this side of the Pacific. Every doughnut is handmade and the experimentation is wild. Think, fried chicken on a doughnut wild. Of course, all of your favorites are available, too.

According to The Daily Meal, Ralph’s Donut Shop has the best apple fritter in the state of Tennessee. Not only that, but it’s one of the best 25 doughnuts in the country. Their criteria? “These donuts need to be almost too good: fresh, soft, gooey, perfectly proportioned, and intended to leave you wanting just one more bite.” Ralph’s may be an old-fashioned doughnut shop, but their big flavors leave a lasting impression.

The Donut Friar has been in business since 1969, baking fresh-made doughnuts every morning. The café is tiny, especially at peak hours when locals and tourists pack inside to get their daily fill. The doughnuts are extremely affordable, ranging from just under to just over a dollar a piece. Keep in mind: The Donut Friar only accepts cash.

Of Fox’s Donut Den, USA Today says: “On the staples and landmarks of Music City, if you are a donut aficionado or just a fan of melt-in-your mouth pastry, this is the place for you. Boasting a decades-long history, Fox’s Donut Den is an icon among local bakeries.” Their doughnut offerings include apple fritters, cinnamon rolls, chocolate, Devil’s cake, and many more. Bagels, muffins, and kolaches round out the menu. We’d say more, but our mouths are full of Fox’s Donut Den.